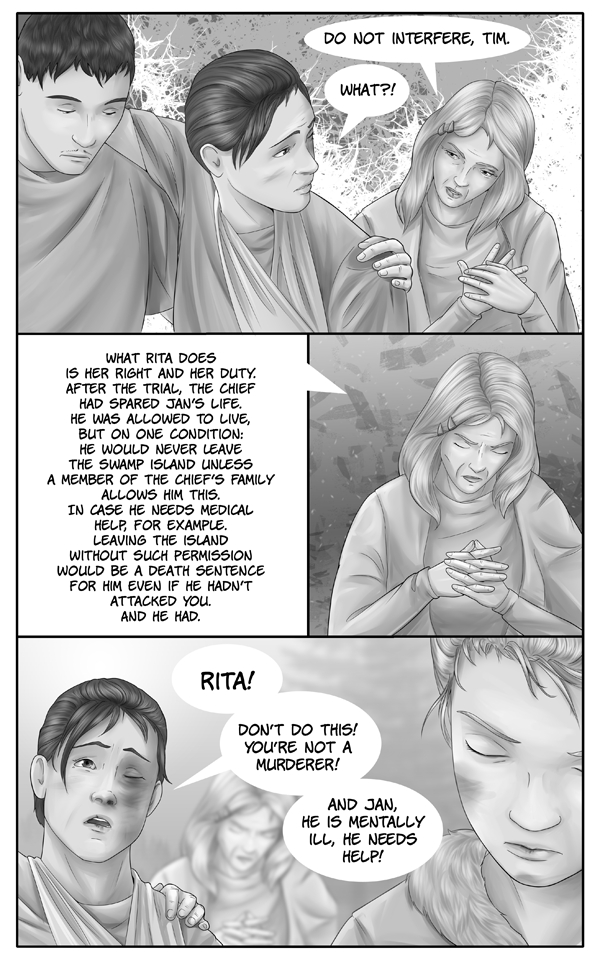 Mildegard
Rita's aunt, mother of Mia and Sola, explains Tim the terms on which Jan was allowed to live after the trial. He was to stay on the swamp island unless a member of the chief's family allows him to leave it. That permission was to be given in case of some emergency. Leaving the island without the permission or a good reason that would suffice for it afterwards would result in a death sentence. So, everyone but Tim here believes Rita does the right thing, though they are not happy to witness it and wish Rita had chosen an easier death for her brother.

The Doodler
Does Hunter law/custom make a difference between kinds of death, or is it so rare it never came up?

(This is another page that rewards re-reads, with what we find out later about Rita's aunt's genetics.)

Mildegard
Death sentences are super rare. Lile once in a century type of rare. So no rules are really established about them.

Speaking of genetics... I probably should make a family tree for Rita's relatives, with the special traits marked on them. That might be interesting.

StLOrca
Yes, Jan is deranged, but can Tim treat him effectively? Jan is a psychopath—dangerous and cunning—a serious threat to the entire colony. Can Rita afford mercy, knowing what he’s capable of doing, or does she put him down like a rabid dog?

Mildegard
Sure, Tim wouldn't be able to rehabilitate Jan alone, but there are much more experienced healers around that can help with this task. But will Jan cooperate?
Killing people is inhumane, but is letting them live so they would hurt and kill others humane then?
Hard questions all around...

BUMBLEBEE
Hmm ... if Rita doesn’t do it, is she then breaking the law? It’s a hard situation. Had she done it in the heat of the moment, they wouldn’t be facing this conundrum.

Mildegard
Yes, she will break the law and disappoint her mother and her tribe at the same time. But if she kills Jan she may lose her husband. It's hard to imagine Tim living with a cold blooded murderer.

ClickMe2WinFREE-iPod
It's a difficult situation. I think that Rita may be willing to leave her past sentiments behind and spare Jan for the sake of her husband's concerns, but if this is an established rule in Hunter society, then Tim may be forced to accept it. This reminds me that Nikt's earlier decision is starting to have some deep consequences...

A dilemma as old as the humanity itself.